Nearly 400 years ago in the lovely, quiet village of Dufton in Cumbria, 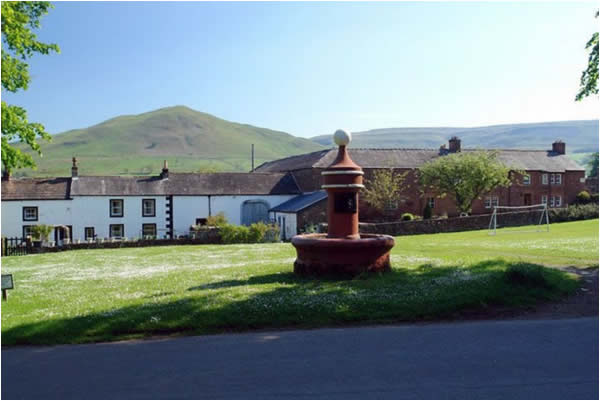 somebody built a workshop. 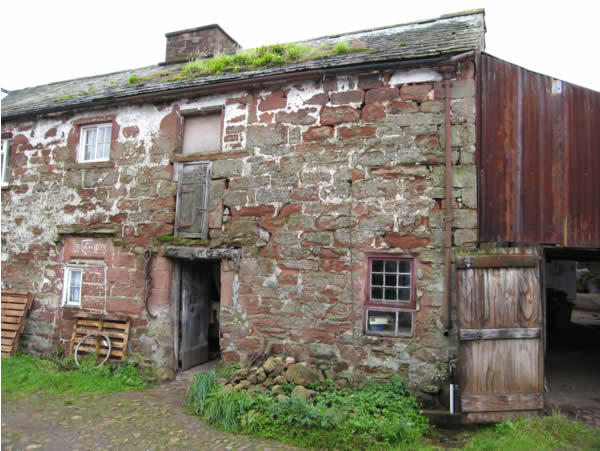 It was in 1632 to be precise, you can still see the date on the lintel.

Just think, King Charles had kicked out Parliament, Galileo had just fallen out with the Pope ( Urban VIII), Christopher Wren was born, Rembrandt was a young painter - and a craftsman set up shop in this little Cumbrian village.

Kings, Queens and Princesses may be fascinating, but I find the thought of all those generations, all those children, that were provided for by craftsmen working hard long hours in this humble workshop really moving.

“Enough” already, I hear you cry – “tell us about handmade hay rakes, that’s why we’re here ! ”

Oh all right, some people just have no romance in their soul !! 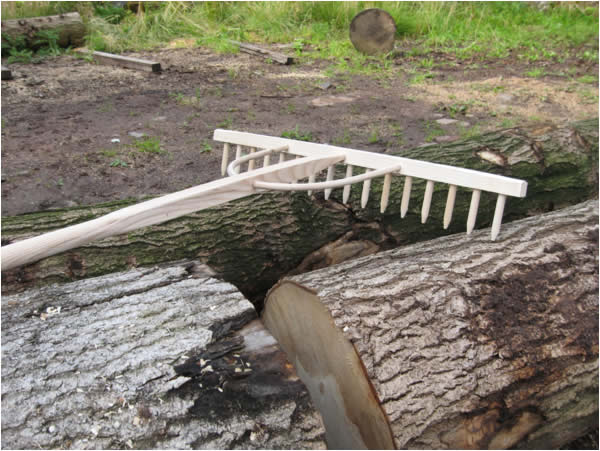 Here is one of the rakes, almost unchanged for centuries. ( In fact, apart from the ‘Bow’ being round not square or forked, it is unchanged in centuries.)
It’s really very difficult though to leave history out of this story.

Although I do not know what all those many craftsmen before them made in the workshop, I do know the Rudds have been there for four generations.
(And with young Matthew on the scene, maybe it will be five .) 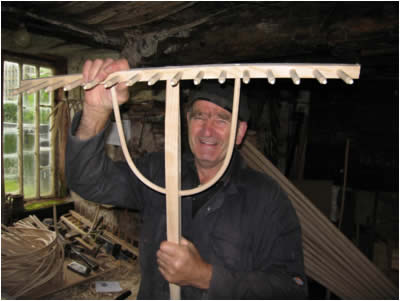 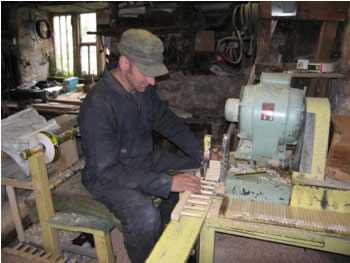 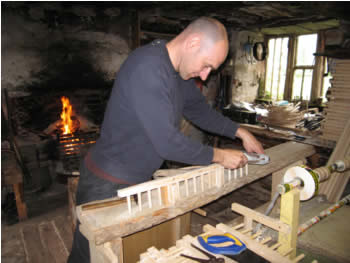 This is John Rudd.
You may have seen him recently on BBC Countryfile with Helen Skelton.

It was his Grandfather that started the business back in the 1890’s.

Just hand tools and know how in those days. (Mind you a whole clutter of those tools can still be seen on his bench !)

John can just about remember the clogs also made back then.

Fashion not being exactly a priority for the hard working, tough fell folk who were their customers.

It was John’s Dad, John J. Rudd, who made the biggest revolution in Wooden Rake making though.

About 50 years ago he not only introduced electricity, but he created the ‘ Demon Dentist’ tooth filler.

This, over all these years, has been by far the biggest innovation.

It makes the holes in the ‘heads’ and pushes in the ‘teeth’.

Can you imagine how long making 16 holes, and filling them securely with the pointed teeth took before the ‘Demon Dentist’ ?
( Although they are still ‘pointed’ by hand.)

But that’s it, you can get carried away with mechanisation.

Each rake still goes through at least 20 hand operations before its completed.

One final test, to make sure the head has been put on the shaft squarely, is to put the shaft into a hole in the wall and spin it.

If each side clears the mark on the bench, their years of experience have worked again, the rake is ‘Square’ !

The teeth are made from silver birch, which they use for it’s strength.
( It was birch that was used to sole all those clogs so long ago.)

Here Graeme, John’s son and 4th Generation ‘Rake Maker’, is using the ‘Demon Dentist, sharpening the teeth, and preparing the head for mounting.
Can you imagine the hissy fit some ‘ Health and Safety’ guy would have seeing this lovely warm fire that’s fed with offcuts ? (He’d certainly ignore the fact that it’s been warming away for centuries !) 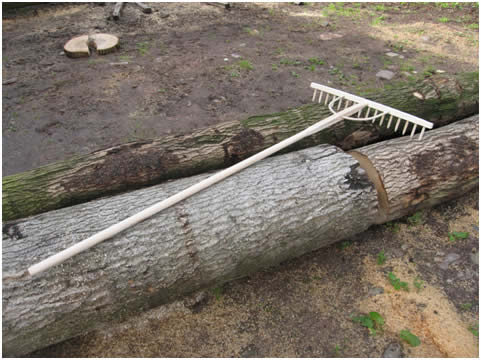 As you probably guess from the number of Ash trees that spring up in your garden, it’s a very sustainable wood !

Is it just an old wives tale that Ash is called ‘Ash’ because it burns so well ?

As you know, we live in Herefordshire, real ‘sheep and goat’ country as somebody once said.

Several local farmers have gone really misty eyed ( a very rare occurrence for a farmer) when they have seen the ‘Rudd Rake’, remembering how many were used around the farm when they were “but a lad”. 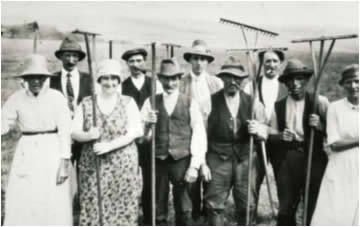 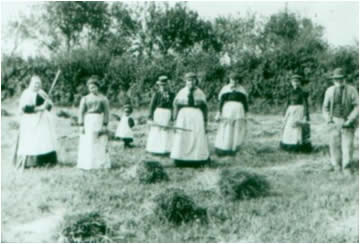 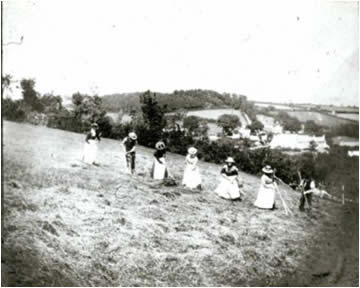 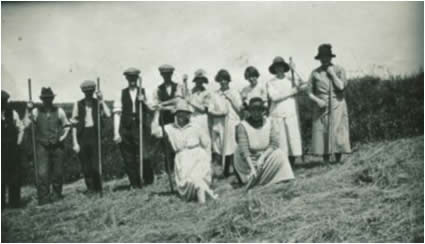 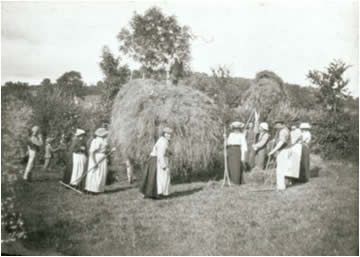 So many thanks to the Ceredigion Museum Archives for these wonderfully evocative photographs.
Well the days of using these Wooden Rakes for hay and straw turning may have long gone, and John and Graeme may be the last craftsmen hand making wooden rakes in any quantity.

But they still have loads of uses.

Raking gravel and leaves ( and the grass when you’ve put off cutting it for too long) making a fine tilth, dredging duck weed from the pond, turning the compost, pulling down apples - those white aprons in the photos would be handy then - and every golf bunker in the country apparently has one.

That’s a long sentence, no wonder I’m out of breath ! 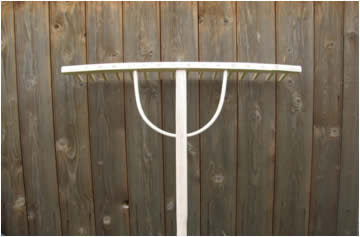 Buy Now
As always though, we do have to pay the couriers to get them to you the next day ( unless it’s a weekend – we just can’t afford them then !)

So we ask you for a contribution towards costs of £19.00 per order, but you can get as many Rakes as you like for the same amount.
( It costs us a lot more than that - £30.10 currently - because the couriers say “Eeek” and go all faint because they’re 6’ long ! )
If you are buying anything as a gift, just let me know if you would like me to drop a card in with the parcel.